Afrikaans survived South Africa’s transition from apartheid, but lost the privileges of power. Will it cope with the challenges of a changing world?

Yet 25 years on from the negotiated settlement that saw Nelson Mandela elected the country’s first democratic president and equal rights and citizenships extended to all South Africans, controversy surrounding Afrikaans’s use as a tool of exclusion and racist discrimination continues.

In recent years, the debate has turned to higher education. Old, conservative institutions that were once seen as the cornerstone of white Afrikaner nationalism have recently been forced to adopt language policies relinquishing the use of Afrikaans as a language of instruction in favour of English, such as the University of Stellenbosch. Well-funded and well-organised legal challenges against this have reached as far as the country’s High Court, which in October 2019 dismissed the case, ruling that the university’s previous language policy advocating Afrikaans created an “exclusionary hurdle specifically for black students”.

As Afrikaans’s societal and political prestige fades from its prominent position in the days of apartheid (“separateness”), South Africa has begun to ask itself what role its controversial and third-most-commonly-spoken tongue should play in the country’s emerging future. Can Afrikaans ever truly shake the legacy of its deeply divisive past and just become ‘one of the 11’ in the eyes of South Africa’s majority?

Among questions surrounding its use, much controversy remains around the so-called “purity” of Afrikaans. Increasingly, the colloquial language is mixed with English. While some see attempts to address this as no different to similar initiatives by the Académie Française in France to keep English loan-words out of the language, others claim that this creates an artificial and elitist form of the language, rendering it sometimes unrecognisable to the majority of its speakers. This was particularly a problem in the academic Afrikaans, previously in use at institutions such as the University of Stellenbosch. 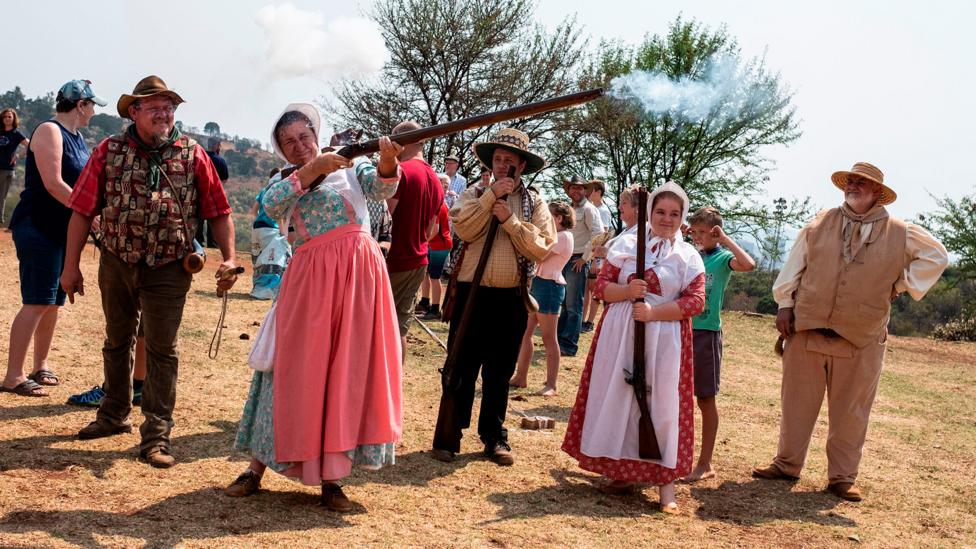 To some South Africans, the language is intrinsically linked to their traditions and history (Credit: Getty Images)

Afrikaans’s origins are complex and highly disputed. Its highest mutual intelligibility is with Dutch, yet it owes its departure from the language of the Netherlands to the influence of slaves brought forcibly to South Africa from South East Asia to work for Dutch-speaking white landowners in the Cape Colony.

Numerically, the descendants of these slaves – who self-identify as “Coloured” – remain the majority of Afrikaans speakers, yet Jamil Khan, a PhD critical diversity studies candidate at the University of Witwatersrand in Johannesburg, says “culturally we are the minority”.

Afrikaans was formally recognised as a separate language from Dutch and adopted as an official language of South Africa in 1925, yet Khan describes this moment as an act of “mass cultural appropriation”.

Visibility remains a critical issue for Coloured Afrikaans speakers, who find themselves underrepresented in white-owned media

Standardised Afrikaans did not much resemble the language spoken by the Coloured community, and to this day little linguistic research has been done into documenting and institutionalising the variety spoken by the majority of Afrikaans speakers. The white variety is commonly referred to as “suiwer” or “pure”, contrasting it with the Coloured variety which is known as “kombuis” or “kitchen” Afrikaans. When Coloured South Africans like Jamil Khan go to school, they are educated in the white variety of the language, and taught to believe that it is somehow a better, more prestigious version of the language they grew up speaking at home.

Khan explains that this perception of inferiority persists.

“The lie that I’ve internalised over time is still there as a niggling thought at the back of my mind – that I only speak this bastardised dialect of what people consider a real language. Despite knowing all the history and facts about the language, that thought still holds some legitimacy in my mind,” he says. 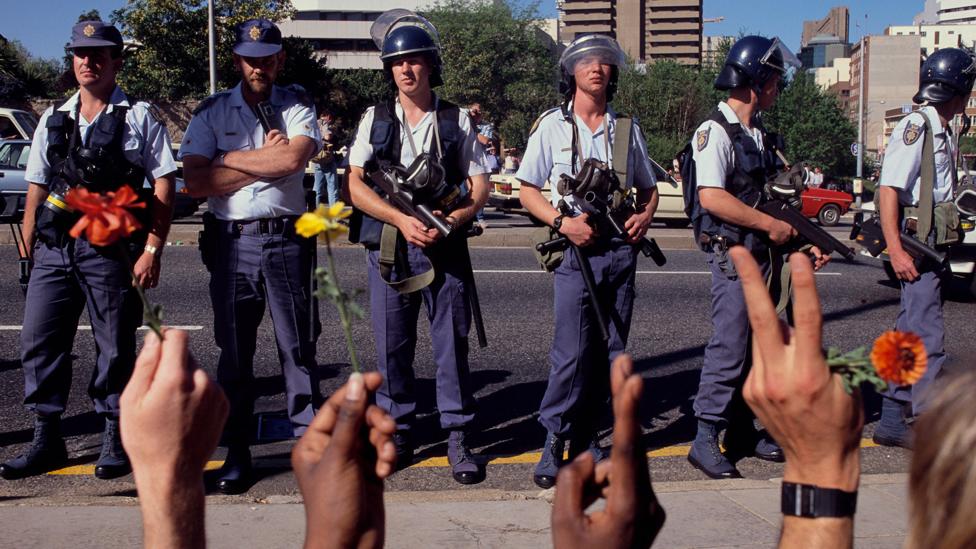 To some, the language still cannot shake off its association with the apartheid regime (Credit: Getty Images)

Visibility remains a critical issue for Coloured Afrikaans speakers, who find themselves underrepresented in white-owned media as it continues to pump millions into South Africa’s booming Afrikaans film and TV industry, further promoting standardised white Afrikaans and white Afrikaans-speaking culture. Yet as film director Oliver Hermanus explains, the problem goes even deeper than just which language people hear when they go to the cinema.

Because we don’t have a history of ever having a sense of a past, we don’t even know how to criticise the way we are represented – Oliver Hermanus

Hermanus’s latest film Moffie – a gay love story between two white Afrikaners serving in the military in 1980s Apartheid South Africa – was released in March this year, just as South Africa introduced one of the world’s strictest lockdowns, banning trading of all non-essential goods, and closing cinemas. He says even when Coloured culture is represented in the media, it is often done so by white South Africans, and frequently misrepresented, yet goes unchallenged by the Coloured community.

“Because we don’t have a history of ever having a sense of a past, we don’t even know how to criticise the way we are represented. We’re just grateful for the fact that someone is willing to make a story about us. It’s inherent second-class citizenship.”

Ronelda Kamfer, a prominent Coloured Afrikaans poet whose work addresses with the sometimes uncomfortable reality of being a non-white Afrikaans speaker, describes the High Court’s ruling on removing Afrikaans as a language of instruction at the University of Stellenbosch as “great”. 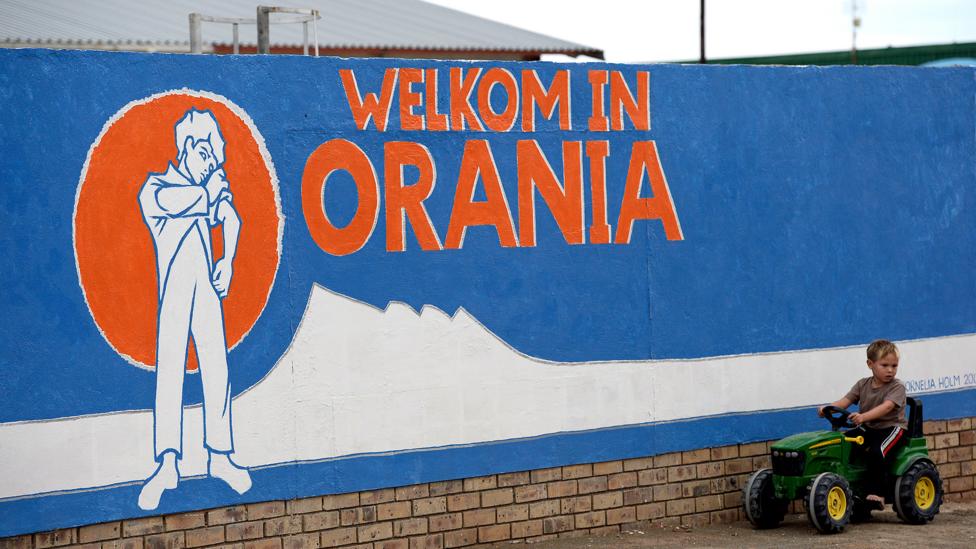 Orania is a small yet controversial, exclusively-white settlement of 1,600 Afrikaners where the language is held on to (Credit: Getty Images)

She describes Afrikaans as having an “Apartheid legacy problem”, yet points to her husband’s experience writing a weekly column in Coloured Afrikaans in the Afrikaans broadsheet newspaper Die Rapport as evidence that things may be improving.

“The first few years we literally only received hate mail from racists, calling us slurs and stupid. Now, a few years down the line, he gets letters from people saying how they actually understand their gardener and cleaner better now because of reading his column.”

Most black South Africans do not speak Afrikaans, although many learn it at school. For older generations, the language still symbolises the brutality of apartheid regime and a time they would rather forget. For the so-called “born-free” generation that has grown up since the advent of democracy in 1994, there may be signs that the language is beginning to lose its baggage.

YouTuber Lasizwe Dambuza recently tried to draw a fresh audience to his channel of over 300,000 subscribers by releasing a series of comedy sketches about young black South Africans struggling to learn the language at school. He then launched a series of sketches in which he played a black woman struggling to date a white Afrikaans speaker. It may have seemed like a long shot to try and bridge the race gap through a language once used so ruthlessly to enforce it, but according to Lasizwe it worked: “Suddenly I had white people, Indian people, Coloured people, everyone coming up to me in the street and telling me they loved my stuff.”

Lasizwe, whose first language is Zulu, now plans to branch out into other languages to continue to reach even more South Africans with his channel. “Languages come in and out of fashion in South Africa. First it was Zulu, then Tswana had its moment, and now everyone wants to speak Xhosa, but I think soon it will come back to Zulu.”

White South Africans retain the vast majority of wealth and financial influence in the country and are an ethnic minority, making up just 8.4% of the population, according to the 2011 census. Although the system of apartheid formally ended at the start of the 1990s, its legacy today has been largely to continue to keep South Africans geographically segregated by race, with exceptional pockets of cosmopolitan blending in some urban areas of cities such as Johannesburg. As a result, most white South Africans live in close-knit suburban or rural communities where they rarely come into contact with their non-white fellow citizens outside of transactional settings with domestic workers, in shops or in restaurants. They tend not to speak any black African languages. 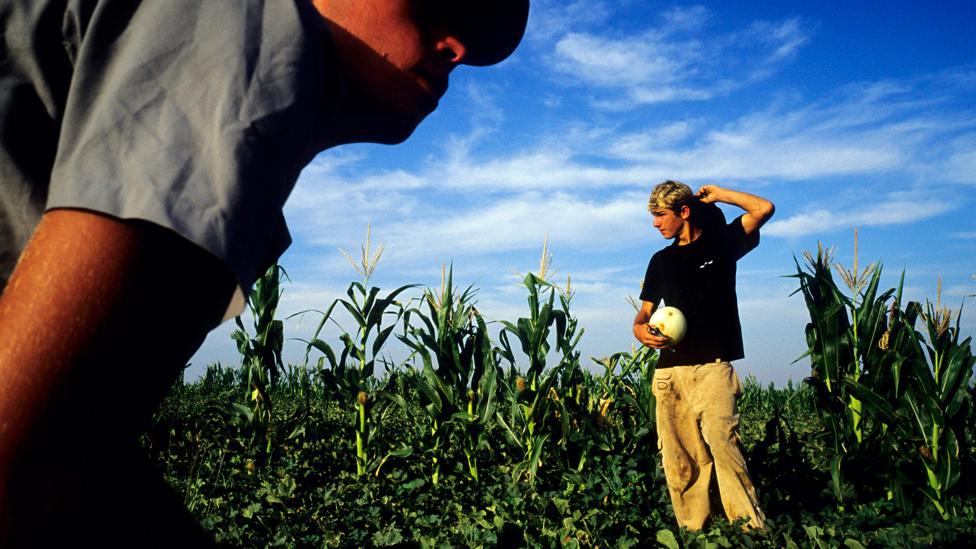 Is Afrikaans’ future in rural pockets that resist the seismic changes in the country? (Credit: Getty Images)

Hoogenboezem now lives in Orania, a small yet controversial, exclusively-white settlement of 1,600 Afrikaners in the vast and dusty Karoo region in the centre of the country. Many South Africans view Orania with suspicion, seeing it as a nostalgic attempt to restore apartheid-era racial segregation in the 21st Century. The town’s founders, however, dismiss this, saying that unlike during apartheid, the town’s white residents do their own manual labour and housework, without relying on cheaper and exploitative black labour. To illustrate this, the town’s flag even features a cartoon of a white labourer rolling up his sleeves on an orange and blue background – the colours of the old South African flag.

For those that can pass the town’s strict interview and vetting process, in which prospective residents are asked to demonstrate their knowledge of Afrikaans and that they live life adhering to Christian values, Orania has grand plans. The town’s founders talk ambitiously about transforming the place into a sizeable city by the end of the century, and aiming to establish it as a cultural and linguistic homeland for Afrikaners.

Yet for other young white South Africans, whose generation was the first to experience the country’s diversity first hand through non-segregated schooling and educational environments, a place like Orania simply does not appeal.

Meyrick Tree, also 24, a waiter and native Afrikaans speaker from Johannesburg, studied Afrikaans literature at university and suggests there may be a fundamental difference of opinion in the way people see the future of the language.

“For people in Orania, the role of Afrikaners is to preserve the past. Yet for people like me, we see our role as transforming what it means to be an Afrikaner to make it something that can sit comfortably alongside other languages and cultures in a diverse and democratic South Africa.”

Photo of the day

Police in Norway Have Not Killed Anyone in Nearly 10 Years